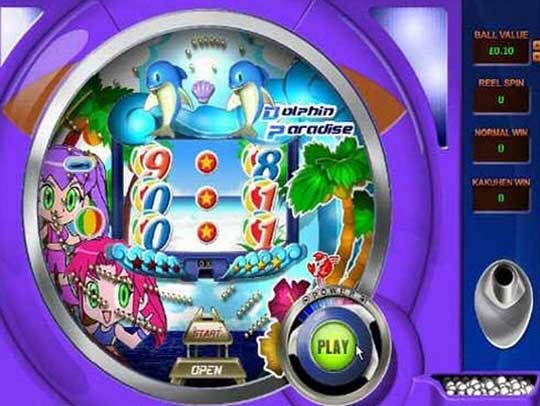 One Asian Game you may enjoy playing online is the Dolphin Paradise Pachinko game which is found exclusively at Playtech software powered sites.

Pachinko is a very fast paced game which has similarities to a game of Pinball however a range of instant cash prizes can be awarded to you as you pay it.

Once you launch Playtech’s Dolphin Paradise Pachinko game you will be given the option of choosing a stake value at which to play it, located at the top right hand side of the game is the coin value setting buttons and you can select a value for each ball that will be launched onto the screen.

Be aware that once you click the Play button a set of balls will continuously start to drop down from the top of the Pachinko game, and each ball released will cost you the coin value you set before you click on that Play button, so if you wish to only play one ball at a time make sure you click on the Stop button as soon as the ball has been launched!

How to Win Playing Pachinko

As you launch each ball onto the Pachinko screen it will work its way down the screen and will hit several different obstacles as it does so, the aim of the game is for you to get the ball into the pocket or Chucker it is known located near the bottom of the screen, this can be clearly seen as it has the word Start written above it.

Any balls that fall to the bottom of the screen are losing balls and as such no winning payout is awarded to you unless your ball does indeed land into the Chucker.

When you manage to get a ball into the Chucker then you are initially awarded a winning payout of 4 balls, the balls are then credited to your casino account as cash credits based on the coin value settings you opted to put into play, so for example if you are playing for stakes of 1.00 then for each ball that lands into the Chucker you are awarded with 4.00 in casino credits.

Once you have been awarded your initial 4 ball winnings the reels in the centre of the Pachinko game screen will then be set into motion and will start to spin, you will see 9 reel positions displayed on the centre of the Pachinko game screen and the top set of three reels and the bottom set of reels will spin whenever a ball has landed in the Chucker.

Should you get two matching numbers on any of the paylines then a bonus mini game is launched which will determine just which number appears on the middle reels, you will be hoping that the number that is awarded during this mini game helps complete a row of three matching numbers on the slot game screen and if so an Open Chute becomes activated at the bottom of the screen and for each set of 15 balls that are caught in that chute you will be awarded a bonus payout worth 100 coins.

How the Pachinko Mini Game Works

There are several different ways in which the mini bonus game will play out once you have lined up two matching symbols on the slot game in the middle of the Pachinko game screen, and below we have listed them all for you.

Reel Spin – Should you be awarded the Reel Spin feature then all that will happen is that the centre reel will spin and you will be hoping you spin in the third matching symbols to complete a winning combination of matching reel symbols.

Pass Circle – The Pass Circle bonus feature will see a Dolphin jump through a hoop three times, each time he does so a reel symbol will be displayed, the final symbols displayed is the one which will spin in on the win line of the slot.

Dive – You will see both a Dolphin and a Girl dive into a pool three separate times when the Dive bonus feature is awarded, and each time they do so one reel symbols is displayed, once again t is the final reel symbols that will be spun in on the slot games reels.

Attack Numbers – The Attacked Numbers bonus feature is quite unique and once awarded you will see the animated Dolphin jumping across the screen and as he does so he will bump into a ball with a reel symbols attached to it, this is done three times consecutively with the last symbols displayed being the one used to spin in on the slot games reels.

Push Ball – When you are awarded the Push Ball bonus feature you are going to see the Dolphin launch himself out of the pool and he will hit a ball three times and as he does so a reel symbols will be displayed, the final number is going to be the one that will then spin in on the slot reels.