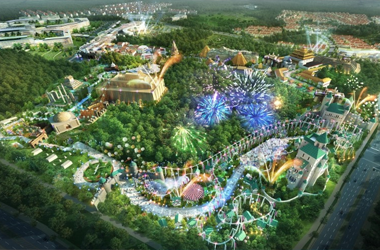 The theme park is slated to be developed at Landing’s upcoming casino resort complex which is being developed in the tourist friendly Jeju Island.

Landing International is a mainland Chinese real estate developer and is in the process of developing a foreigner-only casino called Jeju Shinhwa World on the island. Jeju Island has been a big hit with mass gamblers from Mainland China. The property recently held a grand opening for its 344-unit serviced condominium called Somerset Jeju Shinhwa World.

Landing is a listed company with the Hong Kong Stock Exchange. The company stated in a filing that the theme park called Lionsgate Movie World, will be spread over 122,000 square metres (1.3 million sq feet) and be built around the Hollywood company’s many successful films.

It is our great honor to have Lionsgate as our partner. We are very excited to have the first Lionsgate Movie World at Jeju Shinhwa World bringing Hollywood movies and their immersive environments to our theme park to deliver a premium guest experience

Construction for Lionsgate Movie World is slated to begin in 2018 and the theme park is expected to begin operations by 2019. Seven movie zones such as The Twilight Saga, The Hunger Games, and Now You See Me are being planned within the facility.

Lionsgate chief executive Jon Feltheimer said that the company was pleased to partner with one of China’s top real estate developers to create its first branded outdoor theme park which would also be its largest location based entertainment destination. Under the agreement, the planned theme park will be the only one having the Lionsgate brand in all of South Korea.

In an earlier announcement, Landing International had stated that it is starting construction of a Four Seasons-branded hotel facility at Jeju Shinhwa World. This property is also expected to open to the public by 2019.