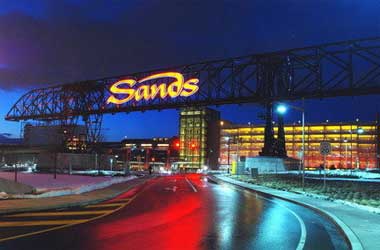 Sands Casino Resort Bethlehem has stopped the $90 million expansion program it was undertaking as talks regarding its sale to MGM Resorts International for an estimated $1.3 billion move forward.

Bethlehem Mayor Robert Donchez provided an update on the stalled expansion project last week and remained positive that the project will commence sometime in the future. In a statement Donchez said

It's my understanding that the expansion is on hold. We understand. It's business. But I certainly hope that whether it's Sands or MGM, the owner goes forward with the expansion when the sale talks are over. It's a significant project.

Sands Bethlehem had decided on rolling out an expansion plan that proposed increasing gaming space, dining operations as well as a separate new poker room. But work stopped after the ground breaking ceremony was held in January as the deal with MGM was announced over the next few weeks.

Sands Bethlehem is considered to be the top performing casino in Pennsylvania with annual revenues of over $500 million. The property has around 2,500 employees and attracts nearly 9 million visitors a year. Bethlehem CEO Mark Juliano stated in December 2016 that the casino would be rolling out an expansion program which would see the gaming floor increased by an additional 100,000 square-feet, adding 81 tables and 380 slot machines apart from two new restaurants.

Sources confirmed that the deal between MGM and Las Vegas Sands in March but added that it would take several months to close. According to industry analysts the merger might take time to be wrapped up due to the extensive due diligence process followed by an application process with the Pennsylvania Gaming Control Board with is required for a casino license transfer. No such transfer request has been received from Sands or MGM so far, according to Gaming Board spokesman Doug Harbach.