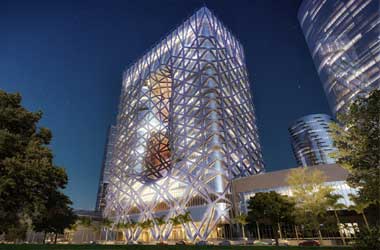 The chairman of Macau casino operator Melco Crown Entertainment Ltd has announced that the fifth tower of the City of Dreams Casino resort in Macau would be called Morpheus and would have only one floor of gaming.

Lawrence Ho Yau Lung, chairman and chief executive of Melco Crown stated in a media briefing that few gaming tables from existing casino operations will be moved to the new facility. The construction of the long-awaited tower is expected to cost around US$1 billion and will be ready for opening in early 2018. No specific date of opening was provided by the Chairman.

The new branding is based on Greek mythology where Morpheus refers to the god of dreams. The current design of the new tower shows it to be of 160 metres (525 feet) high, having 780 guest rooms in addition to luxury facilities like sky villas, duplex villas and full suites. The tower design is by award-winning architect Zaha Hadid who passed away recently. Ho said that the association with Zaha Hadid was an honour adding that the tower was one of the last projects of her works. He further added that it was important to grow the hotel brand into a global one.

According to Ho, the hotel would be aimed at the sophisticated international traveller segment but stated that gaming would not be purely VIP oriented. He highlighted that Melco Crown wasn’t typically highly reliant on VIP gaming, pointing out that less than 5 percent of its gross earnings comes from the VIP segment.

As a company, we are focused on growing premium mass, and that’s always been the case. I think we are, in the whole of Macau, the second-least reliant on VIP… I’m happy that it [Macau's VIP business] has recovered, but I think the driver for Macau and for Melco Crown for the years to come will be based on mass

According to him, improvements in transportation facilities in Macau in the coming years will give rise to better visitation. In his view, the Hong Kong-Zhuhai- Macau Bridge in particular is likely to boost tourist arrivals.

Ho attributed the delay in commencing construction to the complexity of the tower’s design. Noting that despite the opening of two new casino hotels – Wynn Palace and Parisian Macao-Melco properties City of Dreams, Studio City and Altir were still at 95 percent occupancy, he stated that he was hopeful for continued demand for luxury hotel rooms in the future.