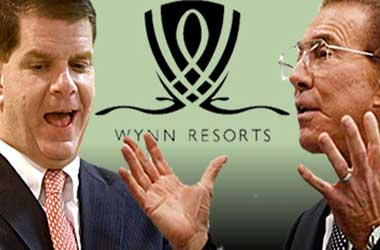 The battle between the city of Boston, Mayor Marty Walsh and Wynn Resorts continues to be played out in the media as both parties have resorted to filing lawsuits against each other based on the proposed $1.6 billion Wynn Everett casino.

Mayor Walsh is adamant that his attack against Wynn Resorts and focus on preventing the Wynn Everett casino for being constructed is solely based on the best interests of the citizens of Boston whereas Wynn Resorts believes that the Everett casino will stand to benefit the city of Everett as it creates more employment opportunities and brings in more revenue to the city which will be used for further development.

Steve Wynn, billionaire and chairman of Wynn Resorts recently filed a claim stating that his company had been unfairly treated in Massachusetts and suffered political discrimination because of their brand. Wynn had also gone on record to state that he had tried to negotiate with Mayor Walsh in the past and sort out their differences but termed Walsh as an unreasonable man and someone who he could not negotiate with.

Wynn Resorts was given a critical environmental permit in September 2015 and soon after members of the Walsh administration and Wynn Resorts executives decided to hold a meeting to see if they could work out a mutual agreement. Robert DeSalvio, president of Wynn Everett left that meeting in a positive frame of mind believing that the meeting was productive for both sides.

Robert DeSalvio and Wynn Resorts were surprised when they found out that Mayor Walsh had filed a second lawsuit against Wynn Resorts claiming that the environmental permit should be revoked as the licensing process was flawed. DeSalvio stated that he was baffled by the actions of Mayor Walsh as it appeared that he said one thing but did another.

Mayor Walsh recently responded to these baffling allegations by saying

He can be baffled if he wants. I think it’s contentious in the sense that there are legal matters. But you can’t take it personal. … Mr. Wynn wants to build a casino and I want to make sure that the residents of Charlestown, the residents of Boston, everything is done right by them.

While Walsh claims that Steve Wynn should not take the lawsuit and the legal assault on Wynn Everett personally, it is hard to deny that there are also ego’s at stake here for both Walsh and Wynn as this entire battle has been played out in the media and gained a lot of publicity.